The fibre of communities 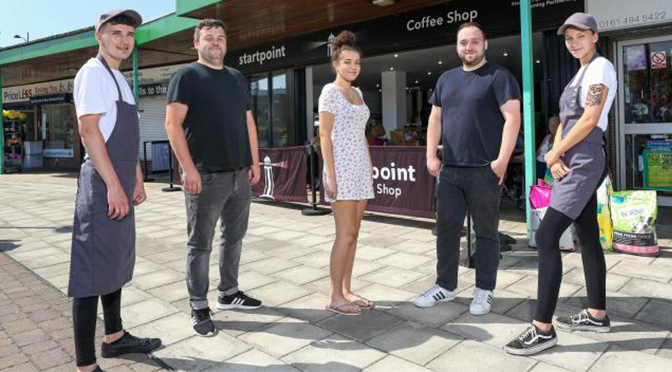 This week, Virgin Media O2 and Good Things Foundation launched their plans for the first ever National Databank to tackle data poverty, by providing free mobile data to people in need. In this post, reposted from Starting Point’s website, Nicola Wallace Dean, founder of Starting Point and community organiser, talks about the origins of the Operation WiFi campaign which has helped to bring about this data bank.

It seems strange to talk about lifelines in a time of a global health crisis but sadly sometimes it takes such a monumental event to realise where the actual lifelines, and indeed the wounds, are in our communities.

In the days shortly after lockdown, when people’s attention moved from buying toilet paper to buying desks and printers to set up home offices; some of us knew this wasn’t an option.

Within days, we were hearing about:

They were days that felt so surreal, yet all so real at the same time.

Incidentally, the woman who was told to move on by the police was suffering mental abuse at home and had no access to broadband. By sitting for a minute, gave her some time out but also the opportunity to connect to the cafe’s Wi-Fi.

I remember talking to Liz Williams in that first week, formally of BT, now of FutureDotNow, about my despair. How, as a community, could we help our own, when life felt so scary and strange? Initially, it felt like we had to sort meals out for kids and access to devices, and for some time, in our little community, we were making inroads.

But with libraries, council buildings, and even trams all reducing access to where people could connect, more cracks started to occur. Those lucky enough to have a car were sat by the cash machines in Morrisons to connect to their Wi-Fi. Others wished for rainy days (there were only a few back then) so they could stand under the shelter outside our coffee shop, connecting to Wi-Fi but pretending that they were waiting for a gap in the downpour.  Finally, others worked out how to connect to a neighbour’s Wi-Fi who lives downstairs and shared the cost.  Ingenious and desperate at the same time.

Right then I knew we needed to do more to help and it wasn’t enough to put a plaster on such a gaping lesion. I knew our job was not only to listen to people who needed help but to spend time with people like Liz, and later Nick Gardham from Community Organisers. This led to the forming of the Operation Wi-Fi campaign, seeking long-term change in how telecoms companies support people who need it the most. We then had conversations with the team at Good Things Foundation who got us devices and data to gift to people in need.

Our little community organisation became a central point of sharing the stories of people who were living lives few of us could imagine, with those who could hopefully bring about change. And as things return to a form of normal for most; we must support, invest and champion the people in these organisations across the country

By working with Stockport Council (#DigiKnow) and Stockport Homes we were able to stand in hallways of tower blocks and teach people how to use Zoom on a borrowed device at a two-metre distance. We showed people how to shop online through their front windows and we taught every single (WONDERFUL) digital champion how to make sure they weren’t on mute!

We weren’t the ones people clapped for way back when, but we were there quietly working away. Very few people will have heard of our teammate James Wilson. He is an instrumental part of our team, who makes sure up to 300 devices are available to borrow at any one time. He also worked every single weekend for 16 weeks solid. We are exhausted but satisfied that we did our best to protect our community when they needed it. Day by day we managed to help people to stem the bleeding but now it is time for change makers to listen to organisations like ours when we tell you we are handing over the baton.

Because places have started to open again doesn’t mean the problem is over. I feel it might have only just begun. Digital inclusion happens in communities. It was disappointing to read a minister stating in a report during lockdown that it happens in libraries. They are an important part of the solution, but if every person had access to free or affordable Wi-Fi, those offline would have the same opportunities that you and I have to explore, communicate with friends and families and connect with organisations like Starting Point.

Thank you to every organisation involved in helping us to have achieved what we have. There were many not mentioned. Please follow @OpWiFiAlliance on Twitter and pester your network provider to step up and support charities like Good Things Foundation in our collective efforts to make sure everyone has the privilege you do right now, by being online to read stuff like this.

The National Databank, which will be open to all mobile operators, will provide free data for community groups to distribute across the UK, including the most digitally deprived areas. The platform has been created by Virgin Media O2, working closely with Good Things Foundation and other digital inclusion experts (including Community Organisers, Operation Wifi, Hubbub and Nominet) – and has been gifted to Good Things Foundation to run through its network of 5,000 community groups.

The National Databank provides, for the first time, a central hub where community groups can access free ‘data voucher codes’ and SIM cards for anyone who needs them. Those accessing free data will also be offered additional support – including digital skills training and signposting to other essential services. To join or support the National Databank, please visit: goodthingsfoundation.org/databank.