When I started at the council about two and a half years ago (as the first explicit service designer), I knew very little about what my future in design and government would hold. I had come more or less straight out of university to find myself in an environment I knew very little about – all that was certain was my passion to use design for good, and my curiosity to explore new spaces where design and creativity could add value.

Time flew, and here I am a couple years later, as the ex-service design lead, about to start a new role in Berlin. Leaving Stockport was a hard decision, but I’d like to think that my time there made this next adventure in my life possible in the first place. So, before I dive headfirst into being a service designer in German (somewhat dreading the extremely long and complicated words!), I wanted to share what I’ve learned along the way:

No one cares that you’ve had to create a journey map in PowerPoint, and no one will wait until your persona template looks beautiful. It’s about getting things done, and as long as what you do is based on the right principles and helps move things forward, you should feel proud of your work (without obsessing about how you might present it later on).

2. Design looks, works and feels different in government
In my experience, the core aspects of design generally that make it a great tool for government are problem solving, being comfortable with change and successfully navigating uncertainty. So far so good. The thing to remember though, is that those problems will rarely be glamorous, and the change or uncertainty that feels exciting for you will be a major hurdle for others. There is a lot of groundwork that has to be done to get things to a certain standard (the mantra ‘design what works, not what’s popular‘ springs to mind) and what might seem like a simple process update to you, is actually an enormous step change for the stakeholders involved.

More specifically, service design in government for me has mainly meant that I am a connector between the design and non-design worlds, and a facilitator of a shared design process. The very nature of zooming in and out of a problem means that you constantly need to involve more/different stakeholders. I began to see that a crucial part of my role was to orchestrate the interactions and relationships that can lead to the design and delivery of a good service (rather than designing it myself).

3. Don’t be precious about roles and be prepared to fill the gaps
The more time went by, the more I started to realise that job titles are rather irrelevant. Personally, I began to see our team of service designers, user experience (UX) designers, content designers and business analysts as one pool of people with varying experience of some core, human centered design skills. It became more about what a specific person can bring to the table rather than what their role was, and I hope things continue to move in that direction.

However, even as a larger team, demand for our involvement in a project still outweighed the supply. This meant that individual project teams were often small, and that sometimes I had to bite the bullet, step out of my comfort zone, and do something that I knew was needed on the project but wasn’t my area of expertise (for example being a project/delivery manager or gathering data). In the moment that could be a real burden, but in hindsight it made me a more well-rounded professional.

4. Find your trojan horse
Early on, I realised that people need to have a reason to listen and engage with you in the first place, before you can even start to involve them in any sort of design work around a project. For me, this way in became visual thinking and our so-called rich pictures (large diagrams that show a complex ecosystem or situation, its stakeholders, and the links between them). For a while I was worried that I might get pigeon-holed as the ‘person who does the pretty drawings‘, but now I know to fully embrace and appreciate it as an accessible entry point for any kind of stakeholder.

5. Things are slooow (until you hit a crisis)
Another important thing to recognise about working in government is that even seemingly simple problems are complex, outdated behaviours and process are engrained, and there are plenty of busy stakeholders who need to feed into decision making. All this adds up to the slow pace of change many of us experience during our time there. It can be very frustrating, especially when you see how quickly things can be turned around during a crisis, when (for better and for worse) change is forced upon people and everyone has a common goal.

For people like me, who don’t plan to stay in one organisation for the long term, this also means that you may not see the fruit of your labour while you’re there. You can only hope that you‘ve done enough to make something stick, and more importantly created some appetite among your colleagues to apply service design to other challenges.

6. Keep swimming upstream
When you first start as a junior designer, you work on the projects that are fed to you and you make the most of it. However, the more experience you gain the more you realise that a service design project can only be successful if it was born out of the right problem in the first place, and is framed in the right way, with the right scope and expectations.

As projects often fall out of higher level policy making or strategic decisions, it therefore makes sense to apply some of the same principles further upstream. It was exciting to experience the beginning of this at Stockport, where our input as designers was being valued more in this space, and I’m looking forward to hearing about how the alliance between policy, strategy and design evolves.

7. Internal users and projects are just as (or maybe even more) important than citizen facing work
On the face of it, it may seem more important and interesting to work on projects with citizens as the end user. However, you quickly learn that if you don’t apply the same rigorous human centered approach to internal users and projects, you are wasting a big opportunity to effect change from within. Internal users are usually easier to access, and if they experience the design approach being applied to their painpoints (and see it bring value), they will be a much better ally when it comes to delivering a good external user experience.

Essentially, I took away that no project is superior to another, internal users are the ones to win over, and any project is an opportunity to make new connections.

8. Keep challenging people and ask questions…but accept that you can only do so much
Once I gained a bit of traction and got more glimpses into the opportunities for design at the council, I started to feel like I wanted and needed to be involved in everything, and that every project needed the challenging voice of a service designer (or design minded person). Obviously, that was naive and unrealistic – I had to acknowledge that you can only change so much at a time, and that sometimes all you can do is speak up what you think is right and leave it at that. It can feel like you’re a broken record at times, but you’ll realise that projects and challenges will keep coming back around for you and/or a design team to pick up another time.

9. You need bottom-up, top-down and external momentum to scale design
As a new function within the council, my role soon involved helping to shape the vision for service design in the organisation. It is already common knowledge that you need both motivated and skilled do-ers on the ground, as well as committed leaders to scale and embed design approaches.

However, we can very easily get stuck in our own council bubbles, so I think another key ingredient is a continuous view to the outside world.  People need to see how others do things and where they are headed, giving people something to aim for and be excited about in the first place. This needs constant and proactive engagement with the wider government community, both across colleagues and leaders (for example, sending only a designer to a conference means that back at the organisation no one at a leadership level can share that same reference point and inspiration).

10. Never stop going on about design. Keep sharing what you know, have learned or are curious about
One of the most rewarding things about my time at the council were those moments when you realise that you have opened someone’s eyes to something new, or that they have become curious to learn more about a certain topic. This didn’t just happen accidentally though, it involved constantly pushing myself to put something out there, and I would hope that this aspect of openness and sharing becomes a more explicit part of any designer’s role in government.  At times I did question if it’s just the same few people listening, but you really never know what other allies you might find (and if anything, you get to practice your public speaking skills and test some new things!)

So, to conclude this way too long blog post, I want to say thank you to all my wonderful colleagues and allies at Stockport. I’ll be following your onward journey from afar, and hope that these learnings might be useful to you, or any other current or future (service) designers in government!

Connect with Lisa on LinkedIn 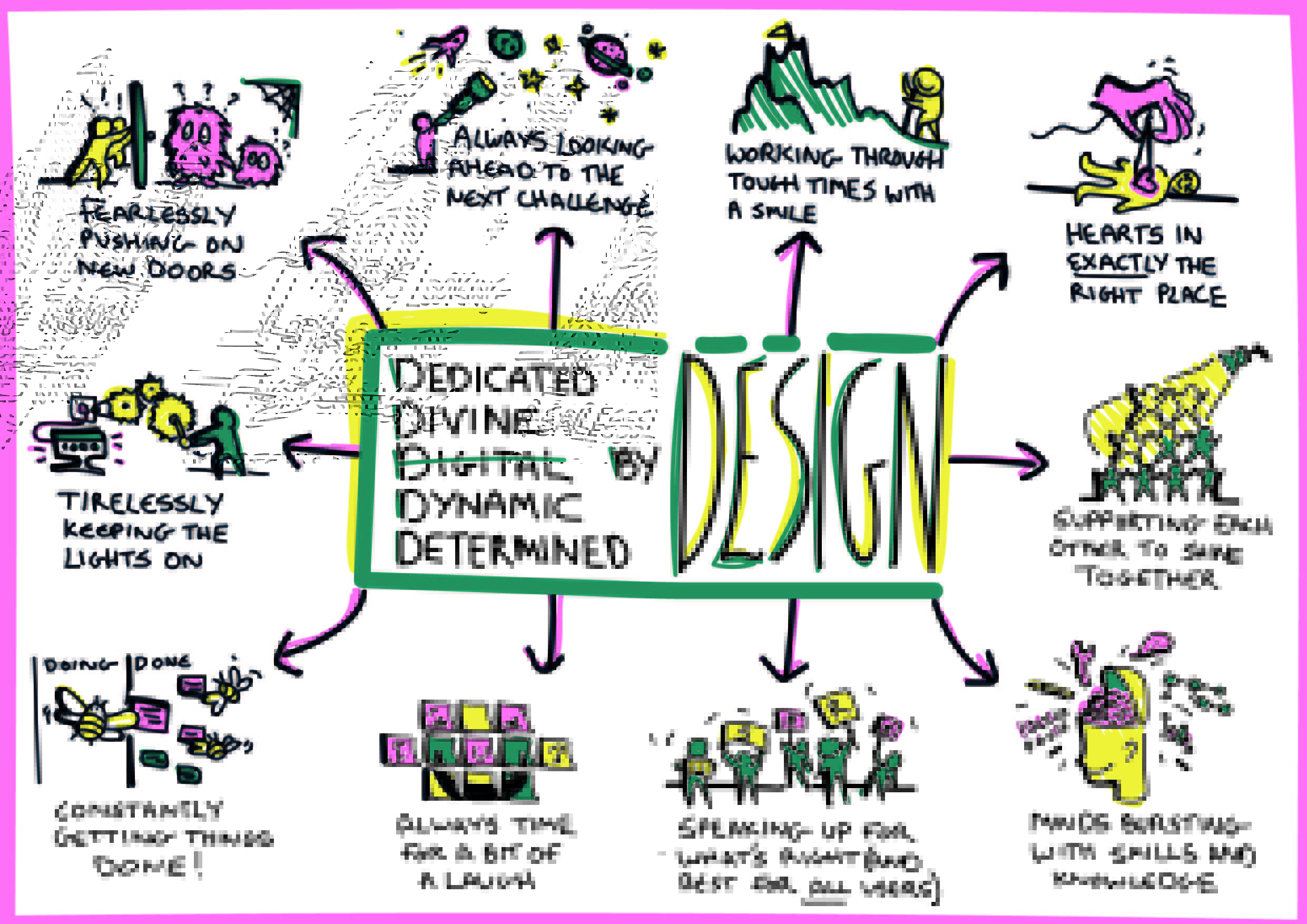