How we prototype a new service Further to the Going beyond digital blog last month, Vim from FutureGov describes the next stage of the service design process for our ‘Financial Landscape’ project.

For the last few months we’ve been working with a multidisciplinary team at Stockport Council which includes Business Analysts, User Experience and Service Designers from Digital by Design. And we’ve all been working with colleagues from across the council including; Finance, Place, Business Support, Revenues and Benefits, Children’s Services and Adult Social Care.

Our goal is to design a user-centred efficient end to end financial service that looks at every user touchpoint with the council, from internal systems and processes to face to face conversations.

We’re eight sprints into the transformation and now at a point of developing prototypes and solutions. If ‘going beyond digital’ sets the vision for how services and organisations can be transformed, prototypes are the way we make it tangible.

What is a prototype?

Prototyping is the quickest, cheapest way to learn something, to test an idea or hypothesis. A prototype doesn’t need to be perfect, but it must include a way of learning from real user behaviour and action. Whereas, in the discovery phase of work the team are focussed on listening to what users have to say, during prototype testing we’re focussed on action and what people do.

It’s one of the key tools that designers use to co-design with end users and there are loads of ways to get a prototype out into the public space. Co-designing solutions helps us to build things that are rooted in real human and user needs, in a way that includes your users throughout the process. Whilst we’re prototyping, we want to proactively iterate and take on feedback so that users can physically see that they’re being listened to and that we’re changing our prototypes based on what they’re saying and doing.

At Futuregov we consider there are four main types of prototyping: Policy-level, Organisation-level, Service-level and Product-level and you can read more about prototyping here. In this instance we are using Service-level prototypes to test a new end to end service.

How does prototyping help?

We began our prototyping process by understanding the patterns that currently exist in the “Tell us about and clear accumulated waste” journey. From the nine stages that originally existed we hypothesised that there were six unnecessary steps in this journey that could be removed.

Keeping our hypotheses tight, measurable and actionable, the purpose of prototyping is to test a new end to end journey where we’ve focussed on just three stages:

By focussing on three stages and removing unnecessary steps we hoped to show that the customer journey is significantly improved. And that there is the potential to unlock resources and savings for the council.

Tell Us, Assess and Pay are patterns that can be used in numerous services across the council, meaning we’re able to start scoping the patterns across other services too. By testing our ideas through prototypes in Waste Services, we can understand what works and doesn’t work in a relatively small service area, before we scale and go big.

When we’re working with prototypes, we want to understand the existing user behaviour, so that the ideas we eventually implement will have a higher uptake. We started by looking at the existing ways citizens report waste to the council. Alongside the tools you’d expect (online forms, calling etc), we noticed people were telling the council about waste issues through different social media channels.

We want to make it as easy as possible for people across Stockport to tell the council about waste issues. What better way than using the tools and technology that people already have in their pocket?

We mapped out and built a paper version of people reporting accumulated waste through different social media platforms and messaging tools. A wooden phone and sliding paper was our prototype tool of choice. Working with paper for prototyping helps us create something for feedback quickly and easily. It’s cheap and a perfect way to test your hypothesis and assumption so you can quickly move to the next iteration, without spending weeks or even months coding.

This tactile method of prototyping allowed us to get feedback from citizens using something they felt comfortable with. Working with paper and wood, we sparked creativity, opened up minds to potential changes and improvements and captured feedback that the service wouldn’t have otherwise received. 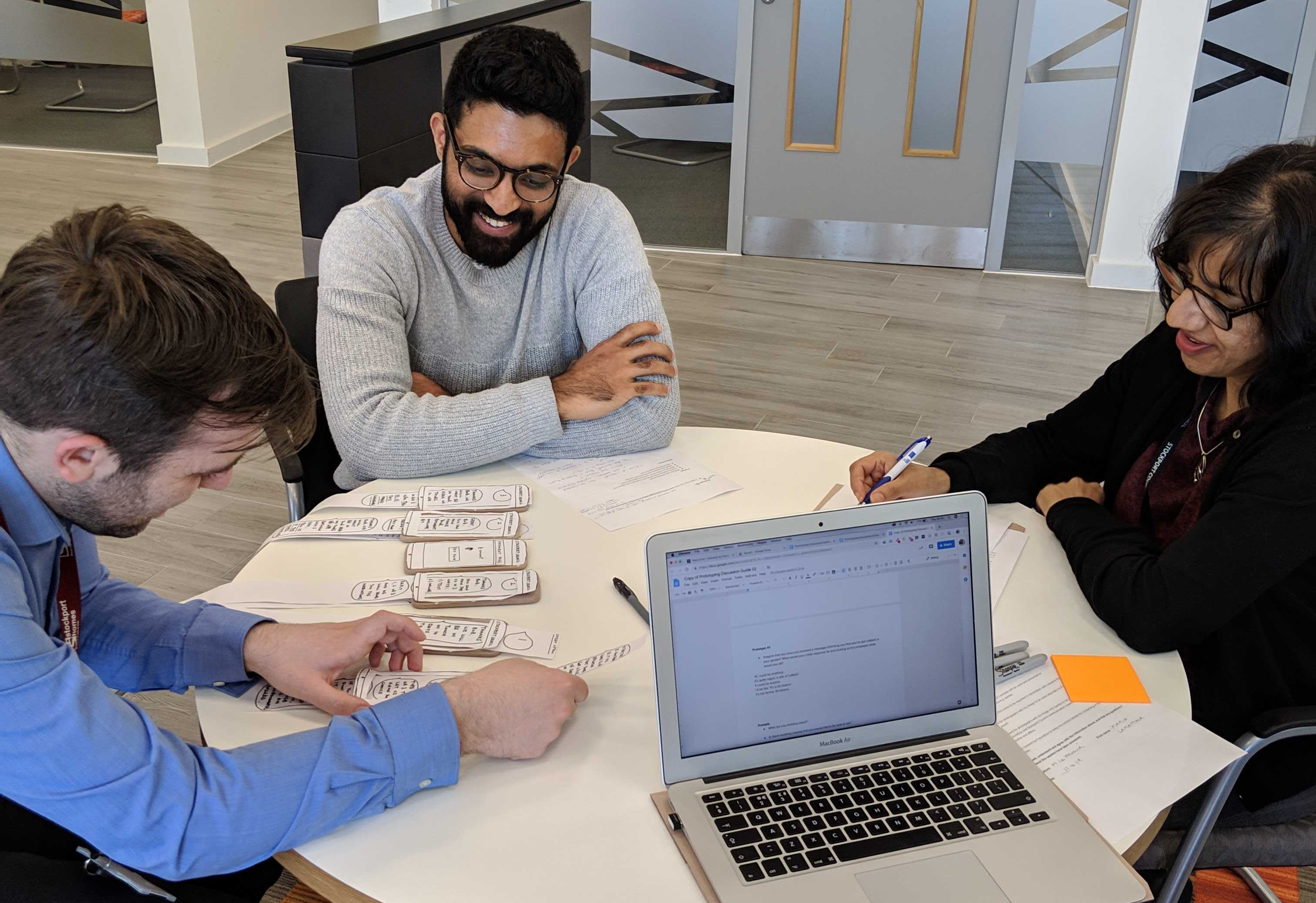 Building on from using the tools that people have in their pocket, the Stockport team were keen to understand how to make better use of digital photos to assess the environmental risk of waste and avoid the costs of a physical assessment.

We mocked up a clickable prototype for internal council staff to collaborate, assess and qualify and book in work for incoming waste reports using online tools. Using simple and free online website building tools, we built a version we could “Assess” internally with photo evidence.

Using clickable prototypes helps to test if we’ve gotten the user experience right. It also helps us understand more about the technical feasibility of future online tools. Our clickable prototype enabled staff to have something tangible to play with, to collaboratively problem solve and to enable us to finesse the requirements needed to get to the change we want to see.

Through building a clickable prototype, we unlocked a way of keeping costs down. ‘Assess’ can help by saving time on physical assessment and reroute resources to the most important, difficult cases. Plus, we can build on the technical capability that the council already has in place.

With “Pay” we wanted to test new ways of communicating with Stockport citizens. We wanted to understand if giving citizens all their options up front, in an easy to understand way, would make people more likely to interact with the council.

Rather than spending time trying to hard code the solution, getting it up and working, we went into Stockport with a really simple text message prototype. We call this type of a solution a medium fidelity prototype. It’s a step up from something paper based but doesn’t quite have the glitz and glamour of something clickable. A medium fidelity prototype hints to the technology that might be used but is still simple and easy enough for citizens to play with.

Using simple technology, like SMS, we can help to close the gap between services and people. It’s often the simplest and easiest way to communicate, crossing barriers and boundaries for people with different needs across services and across the borough. By starting with a medium fidelity prototype, we were able to quickly test and understand different ways that people want to be communicated with, and more importantly, how they respond.

So, we gave residents in Stockport a phone with a sim card and sent them texts from the council. We gave them lots of different options to interact with us and directions about what to do next, but all we wanted to know is whether texting or messaging citizens could work to keep people informed about the service they’re trying to use. Thus far, we’ve learnt that people are willing to respond to the council through simple, easy to use messaging tools – which opens up a whole heap of opportunities for us to explore.

We’re measuring the impact of the new end to end journey in terms of investment needed, costs saved, and experiences improved, as part of building the business case for continued development of the work.

To do that, we’re gathering data behind these prototypes to understand the existing costs, future cost savings, income and preferred channels for each pattern. We want to focus on the ideas that have the biggest potential to scale and improve service delivery across the council.

Alongside this, we’ve created a technical feasibility map that powers all these ideas. We’ll be designing around any constraints, so we stay true to what we’ve learnt from users and deliver something that meets their needs.

The next phase of work is no longer about the prototypes we’ve built, but the change we want to unlock, to focus on designing better, more cost effective services across the whole of Stockport Council.