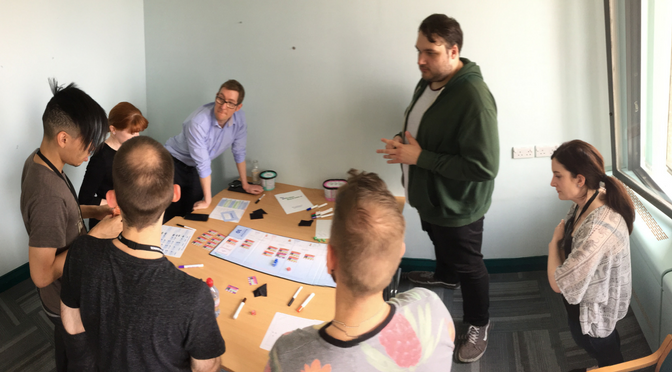 “Tell me and I forget, teach me and I may remember, involve me and I learn”
Benjamin Franklin

In my previous #DigitalStockport blog I described our adoption of the Kanban method and what this means in terms of our approach to visualizing work, our focus on finishing what we start and studying & learning from the mistakes we make and the constraints we are confronted with.

The effect of these efforts have proven to be culturally significant in a very positive way. Individuals and teams feel much more open, supportive and involved in the ownership of work and confident in their contribution to the decision making process needed to select and prioritise which work to undertake and why.

In order to accelerate everyone’s proficiency in the safest possible way we have begun to introduce experiential games to boost on the job learning.

Following David Kolb’s Experiential Learning Model (ELM) we the use the immersive getKanban game to create a “concrete experience” where our people get to collaborate in teams to progress work and deal with the odd sneaky issue, manufactured by the game designer to make your learning experience just as random and difficult as real life!

This allows teams to be confronted by difficulty and learn how to deal with it in a safe environment.

In much the same way the methods used in the Royal Marines practice of “Dislocated Expectations” are often sought out and used by successful teams and individuals in the sporting world. This was seen used most recently by the England Football Team prior to Euro 2016, the world cup winning Rugby team of Clive Woodward and to great effect by the coach of the most decorated Olympian of all time, Michael Phelps. The game also introduces us or, depending on our expertise prior to playing the game, reinforces a number of practices which better equip us to produce high quality work.

Now I’ll have to stop there as I wouldn’t want to give an unfair advantage for those who haven’t yet taken part! In using this as a part of our learning and development plan we are working towards the notion of a “learning organisation” as described by the eminent Systems Thinker Peter Senge in his book The Fifth Discipline.

It allows us to create situations and exercises that:

So far the response to the game has been overwhelmingly good for many reasons. Our people have learnt new things to consider, have had a chance to team up with others that they would not normally work with and they have shared success and failure and a really fun time together which creates an extremely positive bond and a creative team spirit when we return to the real world activity of creating our new Digital Stockport.